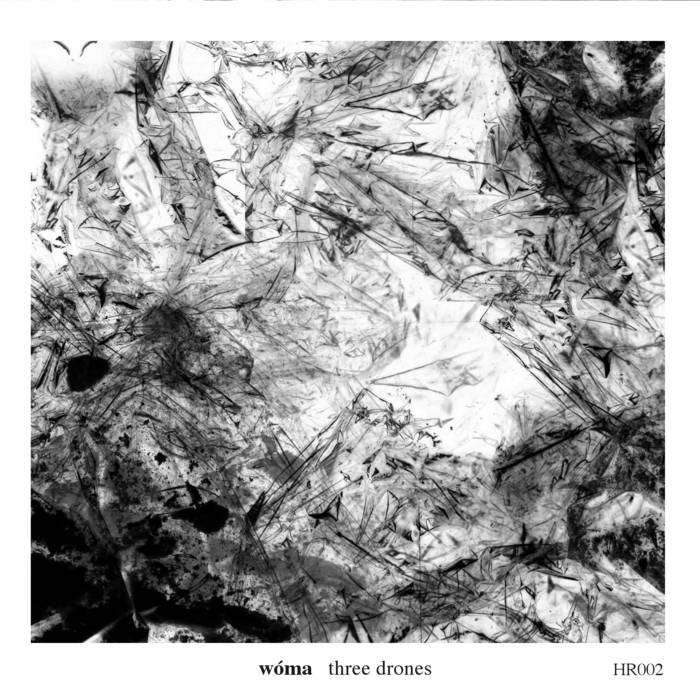 Three drones. Three pieces of sustained, drawn out sound work; the contours of each comprising metallic resonances that weave in, out, and around one another; that swell, move, rise and fall and, eventually, disappear into the infinity of nothingness.

This is a collection of works I created in 2016. I made the pieces using a large steel sound sculpture called a bow chime – essentially, a suspended sheet steel resonator, affixed to which are a number of tuned steel rods that are bowed by the performer. Each piece is improvised in nature – though ultimately, they are all formed within the strict limitations of this instrument; limitations such as the particular resonant frequencies of the steel.

In contrast to some of the other, bow chime-based, work I made around this time (which is set to be released on Hiru Recordings in the coming months), with these pieces I wanted to principally focus upon just sustained tones and drones. This focus was, in part, borne out of my practice of meditation at the time; in particular, the awareness that that practice creates of minute details in yourself and surroundings. The pieces are directionless and without structure. There’s movement within them, but they don’t particularly go anywhere. Because of this, they draw in your perceptions; they allow quiet contemplation; a moment for you to focus your thoughts on their changing sonorities and timbres. Listen to the pieces for long enough, and their prolonged tones will begin to carry and guide your perceptions over every swell and movement.

I would like to dedicate this release to Robert (Bob) Rutman, who died earlier this year in Berlin. Bob was the inventor of the bow chime, buzz chime and steel cello and a truly inspiring musician and artist, whose work has laid the foundation for my own. I am honoured to have performed alongside you, Bob. Rest in peace.

'these tracks creep and creak with a haunting iciness, prickling your spine like fetid emissions leaking through cracks in a false door... there’s a bleak ritual feel to the EP redolent of decaying woodland and nostril-searing night air'


'Poole's handling of metal vapors fosters a wealth of layered overtones and immanent shades while fulfilling the desire to be enveloped in that sort of harmonic aura as frequently as possible... At this level, artists endowed with legitimate responsiveness are capable of immersing equally aware listeners in an amniotic fluid rich in nuances, thus protecting them from any kind of ugliness related to the toxicity of overthinking'

'These are myth-driven sounds, an evocation of a time that summarily surpasses our own in terms of depth and scale... a primitivist daydream in which the aural oscillations of metal being scraped constitute the songs of our ancestors as they collapse into our every word and thought'

Composition and performance by A. Poole.
The Bow Chime invented by Robert Rutman.
Artwork by A. Poole.