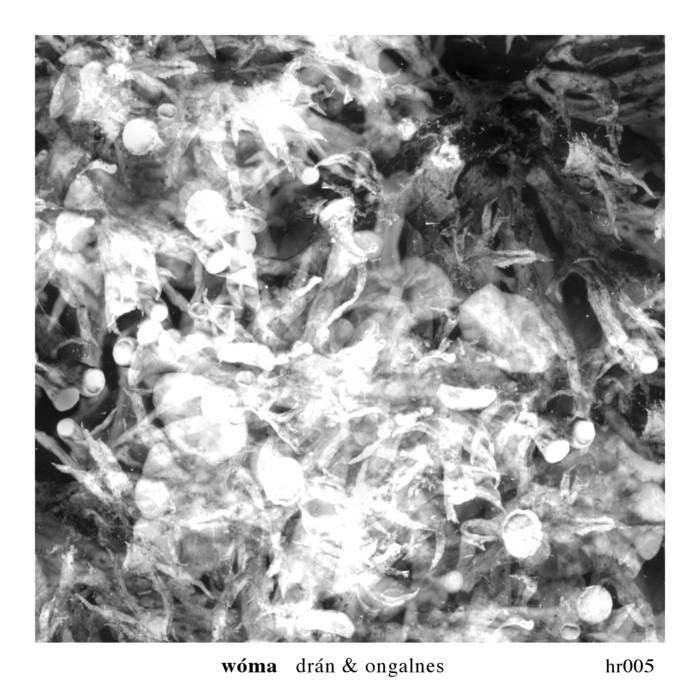 Drán & Ongalnes is a collection of drone works originally released in 2016 as a limited edition cassette run by Manchester noise label, Sacred Tapes. Here they are are, presented again on Hiru, remastered and re-released in full digital glory.

These works follow on from my earlier release, Three Drones. Both were created solely using a steel sound sculpture called a bow chime - essentially, a large stainless steel resonator affixed to a series of tuned rods. Each of the pieces is improvised in nature and the collection of works as a whole were recorded over the space of about a week in 2016.

When I made them I particularly wanted to experiment with layering the bow chime's tones in harmonies, and make works that included some of its more 'vocalistic' qualities. They variously combine primitive, voice-like sounds, almost reminiscent of chant or even whale-song, with deep, resonating waves of sound.

What results - and what I find particularly interesting about the bow chime's sound - is a sometimes harmonic, sometimes dissonant tangle of microtonal layers of sound. Although the bow chime is tuned to play particular pitches, its tuning is never precise or exact and, perhaps as though it’s fighting against being controlled, its tones almost always favour the resonant frequencies of the steel.

There exists a kind of precarious mastery, on the part of the performer, over the acoustic properties of the steel; one in which nature and physics threaten to overthrow order and plunge the instrument’s sound back into a sort of raw, unordered and uncontrolled state. For me, this is music that sits on the very edge of order, music that teeters on the brink of collapse; perhaps it even threatens an anarchic return to a primitive world of cacophony and noise.


'In some cases, the limitations an artist places upon themselves for a project can result in amazing pieces of sound being created. This is the case for this haunting EP from wóma. Made entirely through the use of an instrument known as a bow chime, the sounds are masterfully crafted to create evocative droning soundscapes that range from deep resonations to shaky, slightly clattering sounds that combine to form stirring atmospheres.

You can sometimes even hear the gentle scraping of metal as the individual rods vibrate. Even more affecting is the subtle manipulation of this instrumental to create almost vocal-like sounds, as if an unintelligible voice is calling out to the listener from far away as can be heard on the third track "Cargealdor." Now place all of these sonic wonders inside of a cavernous room and the result is a stunning work of eerie beauty.'

Lars Haur, On The Fringes Of Sound


'The sounds have a distant feel but they evoke images of busy roads, dark alleys and unidentified night-time noises. There is a drone that persists but is more or less audible according to the events playing out above it. The sounds are so brilliantly captured and manipulated to rise and fall with threatening, traumatising realism. Despite the risk that this track may give me nightmares, it is an absolutely compelling listen'

Composition, performance and production by A. Poole.
The bow chime invented by Robert Rutman
Artwork by A. Poole